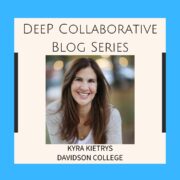 Comics & Graphic Novels of Spain, SPA 332, is a course in which students examine contemporary graphic novels from Spain, paying special attention to the relationship between form and content. This literary art form is the medium through which our class interpreted key issues in Spain in the 21st century, such as how the Spanish Civil War and Francisco Franco’s 36-year fascist dictatorship are remembered through today’s democratic lens. How do artists and writers respond to history and contemporary culture? What do the works tell us about racism and xenophobia in Spain? About sexism, homophobia, and generational differences? About the role of memory in contemporary life, traumatic memory, and the politics of collective memory? Because the answers to these questions fall along party lines, this course seemed like an appropriate one for providing a relevant opportunity for meaningful deliberation. The course is conducted in Spanish, a language which the majority of the students have learned in an academic setting.

Overall, participation in the DeeP Collaborative was a productive and rewarding experience for my students and me. One of the greatest challenges was balancing the time required to meet the multiple Learning Outcomes. Because the course is conducted in Spanish, I needed to ensure that students had significant time building their language skills, in all skill areas including reading, writing, speaking, and listening. Reading about deliberative democracy in Spanish felt like a big ask and reading about it in English took time away from Spanish. Ultimately, we did a little bit of both, and it worked well. Because listening and speaking are at the heart of deliberation, this aspect was a good fit.

In their reflections, students recognized the opportunity and were grateful for it. Moreover, I’ve found that students are evermore well-versed in community norms, so setting the ground rules for deliberation was something that came naturally to many of them. To those for whom this kind of social conduct had not been previously explicitly articulated, working in groups was an excellent opportunity for peer-to-peer learning. After the deliberations themselves, my students commented on the value of listening. They recognized that the deliberative process required that they respond to each other’s ideas as opposed to arguing their own positions. Candidly, I believe this was one of the most successful outcomes of the experience.

Another of the significant challenges also relates to the Learning Outcomes, specifically, the content-focused outcomes. My students were deliberating on material that was entirely unfamiliar to them. They had to gain an understanding of Spain’s history as well as of the current debate around historical memory in Spain and its political implications. Consequently, we needed to conduct the formal deliberations at the end of the semester. Students commented in their feedback that the timing was somewhat stressful. In response to this feedback, I will consider conducting the large-scale deliberations earlier in the semester, even if just by a week or two.

On a positive note, once students gained the required understanding of the context, they were able to make connections with American cultures as well as material from other classes (e.g., trauma, human rights, civil rights, reparations). At first, the positions they were suggesting for the deliberation guides were so radical that they were not defensible enough to lend themselves to meaningful deliberation. Identifying the nuances of similar positions while simultaneously identifying irreconcilable differences was ultimately a productive and enriching exercise. Overall, my students saw great value in deliberating and were glad to have had the opportunity to participate in Spanish.