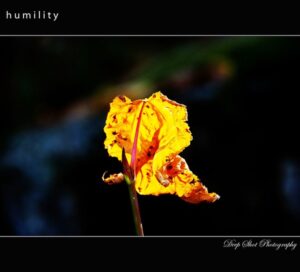 Confucius, a Chinese philosopher, once said, “Humility is the solid foundation of all virtues,” a sentiment reaffirmed by Saint Augustine, a philosopher and a theologian, who said, “Humility is the foundation of all the other virtues hence, in the soul in which this virtue does not exist there cannot be any other virtue except in mere appearance.”¹ Often, humility is incorrectly conflated with low self esteem or self denigration. However, in the Deliberation Citizenship Initiative (DCI), humility is one of the deliberative dispositions, a quality of character or state of mind and readiness. The DCI defines humility as the tendency to “appreciate one’s own cognitive and experiential limitations, embrace the possibility one might be wrong, and recognize the intellectual contributions of others.”² Thus, I would like to argue that humility is intrinsic to and inseparable from deliberation. Not only is humility the most important deliberative disposition, but it is also the most difficult to practice.

To demonstrate my point, I would like to begin with an example. In 2018, the short auditory illusion “Yanny or Laurel” became an internet sensation.³ There was a clear division among individuals who heard “Yanny” and those who heard “Laurel.”However, “Yanny or Laurel” is an example of an ambiguous stimulus where both phrases exist and open conclusions could be drawn. Scientists supported this claim through an auditory experiment. When the audio clip was adjusted to make lower frequencies more pronounced, “Laurel” could be heard, and when the audio was adjusted to make higher frequencies more pronounced, “Yanny” could be heard.⁴ While the short auditory illusion is nowhere near comparable in magnitude and life-altering effects of societal issues today, the public response to the short auditory illusion reflects two apparent aspects of the discourse in our society today: first, it reveals our tendency to fall into confirmation bias and all that it entails; second, our inability to look deeply into the root of the differences in perspectives.

Firstly, confirmation bias and the lack of awareness of this bias results in an intent to create and win a zero-sum game in an argument, and this tendency reflects a lack of intellectual humility. Intellectual humility refers to the recognition that one’s beliefs may be fallible or wrong. In the case of “Yanny or Laurel,” people on either side spoke with absolute confidence such that groups formed to confirm individually-held perspectives. However, while the original clip is attempting to speak the word “Laurel,” both sides are wrong and each contains a fragment of the truth. The truth is that the original clip is an ambiguous stimulus with low and high frequencies, which confuses and requires our brains to make the best interpretation of the stimulus.

On a similar note, much of the argument nowadays offers no space for nuanced perspectives. All of us are capable of snap judgments and going on the defensive when challenged or threatened. After all, heuristics and the “fight-or-flight” response are inborn human psychological processes necessary for survival. Furthermore, the deep political and social divide forces us into groups where we are subject to group polarization (the tendency to develop more radical/polarized perspectives than the original individually held perspectives) and groupthink (the tendency to reach a consensus without critical reasoning and evaluation). If we are to think of our survival as a democracy and rectify our polarized culture, we need to especially do so through deliberation — the process by which we engage with and weigh various perspectives well to make a thoughtful and reasoned evaluation or decision.

However, this process of deliberation can only begin when we practice intellectual humility because humility is an internal evaluation and external action. Intellectual humility, as a subset of humility, compels us to be slow to anger and reflect upon our support for our perspectives, and in doing so, develop a curiosity and courage within us to explore other perspectives that also hold some grain of truth. This leads us to the other aspect of our democracy that is in critical danger,  .

My second point, which is revealed in the “Yanny or Laurel” phenomenon, is our inability to look deeply into the root of the differences in perspectives. This results in the dehumanization of the “other” when we resort to an attack on character rather than an analysis of perspective, which is an indication of the lack of humility. To illustrate my point, we can look at the “Yanny or Laurel” case example. Some people were so overconfident in their position on “Yanny or Laurel” that they, often jokingly, accused the other group of being absurd. While these comments may be “jokes” and not substantially impact the individual, our lived world unveils countless examples of where individuals and groups of people are reduced to name-calling during arguments. Thus, in the entire process of argumentation, but especially in deliberation, humility must be cultivated and practiced. Humus, which means earth or ground, is the root word for humility, which is also the root word for humanity.⁵ By that extension, when we practice humility, we enter into a space where we regard each other on equal ground. We share the belief that no one is superior or inferior to the other, and we recognize the dignity and worth of each other. Most importantly, when we are in a space that values humility during deliberation, humility compels us to be compassionate in how we speak and act, to show grace by assuming the best intent in others, to disagree tactfully, and to empathize deeply with the experiences and background that shape an individual’s perspective.

To summarize, it is through humility that we can cultivate patience, curiosity, courage, compassion, charity, and other virtues and deliberative dispositions. Furthermore, no doubt humility is difficult, as humility is a life-long practice of reflection and evaluation of oneself critically and accurately in the context of one’s relationships with other people. I hope that DCI provides a space to practice and cultivate humility for everyone, including myself — a humility that recognizes one’s abilities and worth such that one is confident in presenting their perspectives, and a humility that values and appreciates the abilities and worth of others such that one is curious and motivated to understand more deeply.