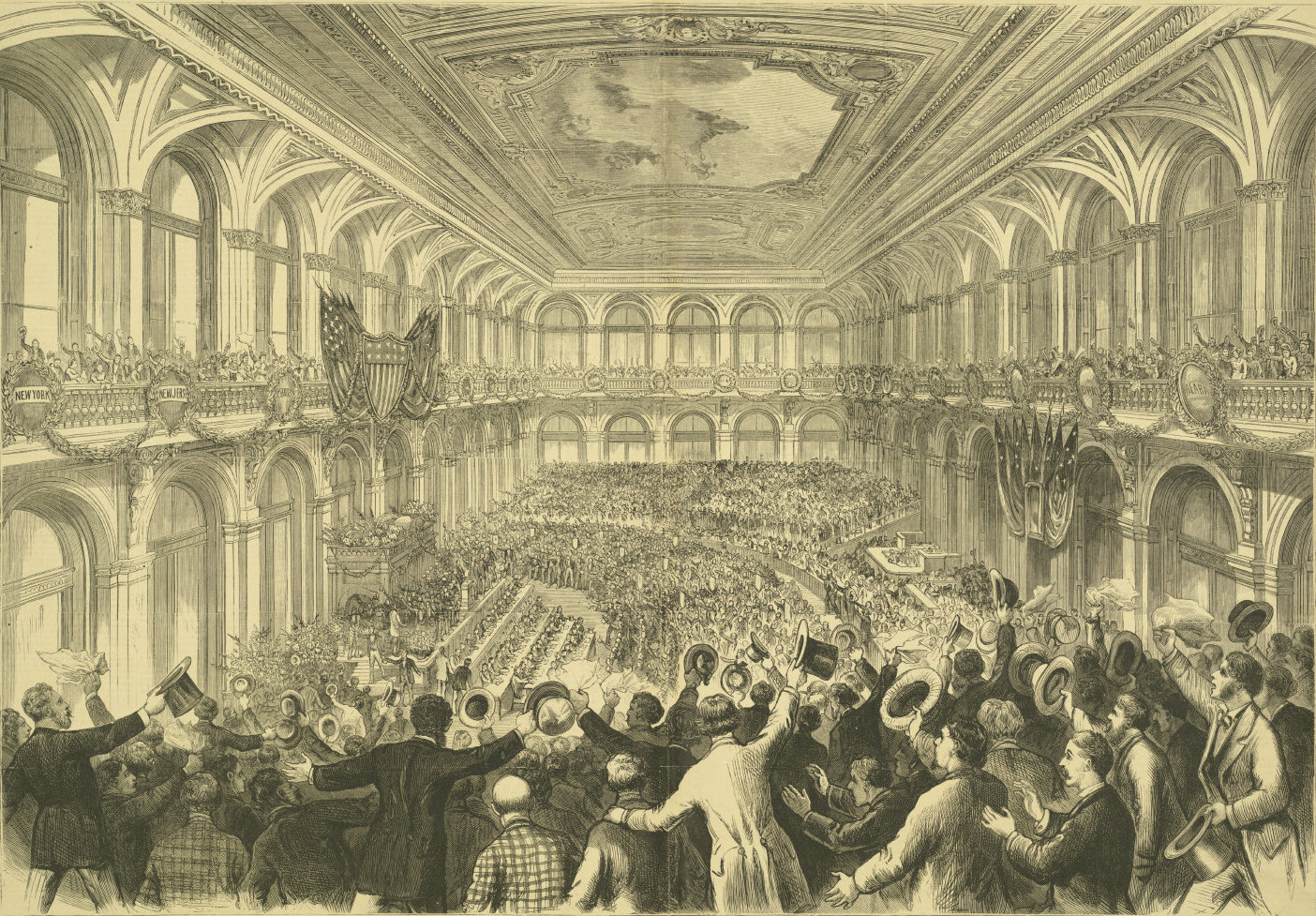 For those who have watched any of the Democratic and Republican National Conventions over the past two weeks, the notion of deliberative citizenship was probably not the first thing that came to mind.  Facing the realities of the current pandemic, these events have completed their transformation into fully ritualized and performative exercises for the parties involved.  This process began decades ago, arguably first with the decision to broadcast the convention live on the radio in 1924 and on television in 1940.1Troy, Tevi. 2016. “The Evolution of Party Conventions.” National Affairs, Summer 2016. https://www.nationalaffairs.com/publications/detail/the-evolution-of-party-conventions.  It was then accelerated by the primary/caucus system that made the outcomes of the conventions all but pre-determined.

But conventions have not always been so staged and predictable – the first Democratic Convention heard over the radio in 1924 required 103 ballots to determine its nominee (JohnDavis) and the first televised GOP Convention in 1940 nominated a surprise “dark horse” candidate (Wendell Wilkie).2Troy, Tevi. 2016. “The Evolution of Party Conventions.” National Affairs, Summer 2016. https://www.nationalaffairs.com/publications/detail/the-evolution-of-party-conventions.  Some commentators have lamented the loss of the deliberative element of conventions that drove this unpredictability but enabled a broader range of the party faithful to engage with one another on the future of their party.3Karabell, Zachary. 2020. “It’s Official: Conventions Are History. So What Replaces Them?” Politico, August 22, 2020. https://www.politico.com/news/magazine/2020/08/22/its-official-conventions-are-history-so-what-replaces-them-400099  Kilgore, Ed. 2020. “Let’s Finally Get Rid of Party Conventions.” Intelligencer, May 4, 2020. https://nymag.com/intelligencer/2020/05/who-needs-political-party-conventions.html  Shafer, Jack. 2020. “Are the Conventions Due for Cancellation?” Politico, August 19, 2020. https://www.politico.com/news/magazine/2020/08/19/are-the-conventions-due-for-cancellation-398660.  Before conventions were organized in the 1830s, presidential nominees were selected by each party’s congressional delegation of senators and representatives.4“Nominating Presidents.” n.d. United States Senate. Accessed August 27, 2020. https://www.senate.gov/artandhistory/history/minute/Nominating_presidents.htm

Even the first conventions, however, were constrained by efforts to project unity and unanimity in preparation for the coming general election.  The Chairman of the 1835 Democratic Convention, for example, asked for the proceedings to be “marked by a spirit of the utmost harmony and union” and that delegates “be willing to sacrifice all personal predilections and preferences.”5Pfau, Michael William. 2006. “Conventions of Deliberation? Convention Addresses and Deliberative Containment in the Second Party System.” Rhetoric and Public Affairs 9 (4): 635–54. https://www.nationalaffairs.com/publications/detail/the-evolution-of-party-conventions.

Given these dynamics, how can we make sense of the role of party conventions?  In theory, they are designed to enable parties and their members to exercise the three forms of civic agency that Danielle Allen outlines – “disinterested deliberation, prophetic frame shifting, and fair fighting.”6Allen, Danielle. 2016. “What Is Education For?” Boston Review, April 26, 2016. http://bostonreview.net/forum/danielle-allen-what-education  They bring together people who share at least some interests to listen to each other and collectively plot a path forward, in terms of ideology, policy, and electoral strategy.  They provide a platform for them to then share their vision with the broader public, and to continue the process of fighting – ideally following ethical norms of fairness – to win at the ballot box.

In reality, however, these forms of civic agency can often be in tension.  Some prophecies may create strategic problems or not be accessible to deliberative exploration; deliberation can be seen as hampering the process of both frame-shifting and election-winning; and the short-term focus on racking up wins may undermine both deliberative and prophetic efforts.  Great prophets may not make good deliberators or good strategists; great deliberators may have an aversion to both prophetic declarations and political battles, and great fighters may not always see the utility of either deliberation or prophecy.

Given these tensions, conventions may have bit off more than they could chew, and it was perhaps inevitable that they would shed at least one of these civic functions.  Deliberation was the natural one to go, particularly as advances in communication technology enabled long-distance coordination on party priorities.  Deliberation also can project a sense of discord and dissension among the ranks.  Party members can deliberate with each other in person, over the phone, or now over Zoom – why do they need to do it at a convention?

But the unfortunate reality is that such “grassroots” deliberation is not that common.  Polls have found that only 1 out of 4 people discussed politics in the last week with family or friends, over half have stopped talking about politics with someone and find it stressful and frustrating to talk about politics with people they disagree with, and nearly two-thirds feel the political climate prevents them from saying things they believe.7Ekins, Emily. 2020. “Poll: 62% of Americans Say They Have Political Views They’re Afraid to Share.” Cato Institute. July 22, 2020. https://www.cato.org/publications/survey-reports/poll-62-americans-say-they-have-political-views-theyre-afraid-share Jones, Jeffrey. 2019. “Americans Converse More About Family Matters Than Politics.” Gallup. July 30, 2019. https://news.gallup.com/poll/262166/americans-converse-family-matters-politics.aspx Jurkowitz, Mark, and Amy Mitchell. 2020. “Almost Half of Americans Have Stopped Talking Politics with Someone.” Pew Research Center’s Journalism Project (blog). February 5, 2020. https://www.journalism.org/2020/02/05/a-sore-subject-almost-half-of-americans-have-stopped-talking-politics-with-someone/ Pew Research Center. 2019. “The Public’s Level of Comfort Talking Politics and Trump.” Pew Research Center – U.S. Politics & Policy. June 19, 2019. https://www.pewresearch.org/politics/2019/06/19/the-publics-level-of-comfort-talking-politics-and-trump/.

This is a problem because democracy, in short, needs deliberation.  It needs it not only between those who deeply disagree, but also among those who at least appear to agree on many things.  Done poorly or ended prematurely, it can indeed reveal and exacerbate sources of tension and conflict.  But done well, deliberation enables us to understand the experiences, emotions, and reasons that underlie each other’s political positions.  It provides us with a space where we can share our prophetic commitments and can reveal to us why we should fight fairly with one another.  And it compels us to seek out and implement new solutions that address all of our concerns, not just our own.  But it takes time and planning, and it often seems expedient to prioritize action over talk.

Both talk and action are important, and sometimes action needs to come before talk.  But it is also important to realize that talk can also be a form of action, and it is necessary to create any real sense of unity, whether it is within an organization, a school, a party, or a nation.  Without such unity born out of meaningful deliberation, any action we take risks being reversed by those we never spent the time to truly talk with.  And such lack of unity creates the conditions for the implementation of policies that threaten our democratic freedoms under the pretense of an illegitimate demand for order and a false claim of fraternity.

So conventions may not be, and may never have been, the best way to foster such deliberation, but we still need to find, or create, the forums in which we – as party members, as citizens, as human beings – can productively deliberate with one another.  Our democracy depends on it.

Picture above from Cornell University Library