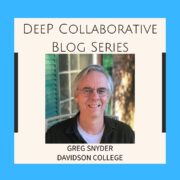 Having participated in the DCI program since it was launched here at Davidson, I looked forward to putting lessons learned into practice in a classroom setting. I’ve done theatrical, debate-like experiments in the past, but with the deliberative model brings with it a whole toolkit of methods and approaches.  A good opportunity presented itself with REL 236 The Bible and Modern Moral Issues, which is by nature more topical and contemporary than any of my other courses, which tend to be historical in nature.

The course began by looking at some issues that we think of as non-controversial: the practice of human enslavement and colonialism. Of course, back in the day, these issues were hotly debated and the Bible was brought in on both sides. We looked at the arguments pro and con, the goal being to show students that the Bible doesn’t deliver any simple message on most ethical issues, and that the phrase, “the Bible says…” is quite problematic from a hermeneutical standpoint.

We then looked at the Bible and homosexuality.  I decided to put this at the front end of the course because I did not want to treat it as a controversial issue. If there was an LGBTQ student in the course, they shouldn’t be made to feel as if their identity was being debated. This turned out to be somewhat complicated. There were a good number of conservative Christian students in the course for whom the issue was not settled at all. For them, it was just obvious that homosexuality was wrong and that the Bible condemned it. Even ten years ago, when I last taught the course, I hadn’t encountered this dynamic and it came as a surprise. I found this illuminating: the basic facts on the ground were not as expected when it came to this issue.

I was aided in thinking about this by the chapter, “Framing and Selecting Issues,” in The Political Classroom, one of the supplementary texts for the course that members of the DeeP Collaborative also read and discussed together. That chapter gives no simple guidance, but it does provide useful concepts and examples for thinking through the decision of whether to approach an issue as controversial or not.

We spent three and a half weeks learning about and practicing the process of deliberation, focused on three issues: 1) the Bible and Judaism, 2) the Bible and the environment, and 3) the Bible and abortion. We imagined ourselves as students at the Fictional Liberal Arts Bible College of the South (FLABCOS) confronting problems and policy questions as they arose.

For purposes of illustration, here’s the first prompt.

A group of students at FLABCOS has started a chapter of Jews for Jesus. They’ve taken to hanging around the local synagogue on the Sabbath passing out literature and trying to engage people in conversation about Jesus. Rabbi Schneerson confronts one of the students and asks them to stop. The student responds by saying that their faith requires them to do this, quoting Acts 4:12: “There is salvation in no one else, for there is no other name under heaven given among men by which we must be saved.” Another student brings up John 3:16: “God so loved the world that he gave his only Son, so that everyone who believes in him may not perish but may have eternal life.” A third student sounds a more ominous note: “it says right here in the Gospel of Matthew (27:25) that when Pilate was willing to let Jesus go, the crowd of Jews insisted that he be crucified, saying “let his blood be on us and our children!” (Mt. 27:25). But it also says in the Book of Acts (4:10-12) that God has graciously offered Jews forgiveness as long as they confess faith in Jesus. They end by referring the Rabbi to the Jews for Jesus website.

The Rabbi sends a note to the President of FLABCOS, objecting to this student group and their aggressive approach to his congregation. He claims that FLABCOS should not be underwriting such a group (like student orgs at Davidson, the FLABCOS JFJ branch receives school money). The President of FLABCOS, Bob Johnson III, turns the issue over to the WDBS (What Does the Bible Say) Task Force.

Your report to the president should include arguments on both sides of the issue, together with references to scripture and a policy recommendation.

This last piece—the policy move—was one of the most helpful things tactics from the DCI experience. Ending with a joint statement or policy recommendation forces compromise and convergence.

I conjured up a similar scenario with FLABCOS for the deliberation on environmentalism and that seemed to go well.

The deliberation on abortion coincided almost exactly with the leaked draft of the Supreme Court ruling on Hobbs and that raised the stakes considerably on that discussion. The fun fiction of FLABCOS seemed ill-suited to the gravity of the situation. We took some extra time to do additional readings to those listed in the syllabus. This deliberation was more fraught.

At the end of the course, I had originally planned for students to take up a moral/ethical issue of their own choice, but I changed plans on hearing about an incident here on the Davidson campus. A Christian group had invited an assistant coach to address one of their meetings, but when it became clear that the coach was gay, the invitation was rescinded, because the national group of which the Davidson group was a chapter had a policy on the books that explicitly denounced same-sex sexual relations.  This led to a split within the group, with some students splitting off to form an alternative group. We took the opportunity to use this incident as the final occasion for deliberation.

For their final project, I had students revisit the biblical materials and secondary readings we had consulted earlier in the semester and imagine themselves as a member of the Campus Community and Religious Life Committee, writing up a description of the event along with their recommendations for action, addressed to incoming president Doug Hicks.

In general, we achieved a high level of frankness and fellow-feeling in this course, more than probably any other than I’ve taught here at Davidson in 23 years. I will definitely integrate deliberative elements into future courses.