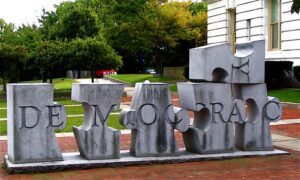 Political division and hostility have almost unambiguously grown to new heights in recent decades in most modern democracies around the world. Most citizens pay more attention to politics and their political experiences than ever before; yet, despite this tangible political vigor, proper democratic behavior has been stunted with the intensified hostility that individuals feel towards people with different views.

Such a state of democracy is, at least in part, the reason for the Deliberative Citizenship Initiative in the first place. And in my short stint in the DCI, I have seen firsthand the ability of deliberation to cool down some of these emotional political responses that have become almost natural in today’s democracy. I wish to pursue a parallel thought that commends deliberation for its successes while also recognizing that as a political activity it could result in a further continuation of the cycle of polarization that we see play out today. In this way, I hope to paint a more comprehensive picture of deliberation’s successes, its possible risks, and the ways that the deliberative process itself might actively help ease those risks within the context of current democracies.

Many of these ideas originate from Robert Talisse’s book, titled Overdoing Democracy, which I studied in a course last spring. In it, Talisse, a Vanderbilt professor of philosophy, argues that we have pushed democracy to an extreme, wherein politics seemingly occupies or is reflected in all parts of our lives. As he points out, people seem to have gained the uncanny ability to connect consumption choices with someone’s political beliefs. For example, an individual’s choice to drive a truck or a hybrid has become an almost natural signal of their purported political beliefs. While this form of political association has long existed, more and more of our seemingly mundane activities, such as where we buy our coffee or which gym we belong to, are becoming associated with a political valence. He attributes this ability and this growing reflection to what he calls political infiltration, and specifically to the “reach” of politics into our lives.

Political infiltration can help to explain the gradually deteriorating wall that we see today between our conceptions of the individual and the citizen. In other words, politics is infiltrating our lives to such a degree that we have grown to regard ourselves and others first and foremost as citizens rather than people. This shift is crucial, for it means that previously benign actions and choices have become deeply connected with people’s political identities. Due to this deteriorated wall, many citizens now understandably interact with politics with greater outrage, for it has become increasingly difficult for people to separate attacks on their ideas from attacks on their person. This idea leads into the next key components of political infiltration: political sorting and political fandom.

Due to the difficulty of separating attacks on ideas from attacks on the person, many people have physically sorted themselves in life in order that they don’t suffer as many of these “‘personal” attacks. It has therefore become more commonplace for the people at someone’s favorite coffee shop, grocery store, or just within one’s neighborhood to share similar political beliefs. The danger in this sorting can be seen by understanding group polarization. Group polarization is the gradual process in which individuals surrounded by people that agree with them take on a more extreme version of their original position. The affirmation from those that agree with them seems to provide enough psychological encouragement to where people come to believe in a slightly more extreme position. Through group polarization individuals have gradually intensified their views, leading to the transformation from citizens to political fans who have loyalties to their political “teams” or parties that transcend their loyalty to proper democratic procedure.

It is from this setup of political fandom and group polarization that we can recognize some of deliberation’s possible risks when done improperly. If people’s lives are filled with those who generally agree with them, deliberation could be composed purely of people that agree with each other. This would further the process of group polarization and lead to more intensified views and greater antipathy towards the opposing party. This antipathy is particularly troublesome because proper deliberation and democracy rely on a mutual trust that the people with whom one disagrees will respect the process and engage as rational participants. Thus, a possible risk of deliberation is that it could transform political fans into even greater political fans. And, as we have seen in recent years in the United States, distrust of and antipathy towards those with alternative views can result in the refusal to listen to them, meaning that people become more group polarized and even greater political fans. This is the polarization cycle and given that deliberation can be understood as a political activity, it is possible that improper deliberation would only further this cycle.

Despite these risks of deliberation, it has built-in defense mechanisms which, when done properly, help to ease some of the potential risk of furthering the polarization cycle. The first element of proper deliberation necessary to mention are the set ground rules and agreements that are established from the outset which help to guide the conversation and correct comments that might reflect people’s political fandom. These agreements can help to cool individuals’ knee-jerk comments as the facilitator pushes individuals to provide accessible reasons for their positions. The second related element are the deliberative dispositions, including egalitarianism, humility, and open-mindedness (among others), which are also utilized by the facilitator to push the participants to detach from their potentially instinctual political responses.

A third crucial feature of deliberation, as it relates to group polarization and fandom, is the devil’s advocacy that the facilitator(s) takes on. Deliberation must try its best to represent all voices in the discussion, or at least recognize when certain perspectives might not be present given the people available. This is where proper deliberation can make the most direct impact in countering group polarization. If we recall, group polarization occurs when everyone in a group setting agrees with one another and takes on a more extreme position. But with proper facilitation, devil’s advocacy helps to fill in the potential gaps in beliefs and almost simulate a group composed of different views. In this way, facilitation can limit some of the psychological belief affirmation.

All three of these elements point towards the key distinguishing element of deliberation: facilitation. Facilitation lies at the heart of deliberation, and proper deliberation (especially in a highly politicized environment like we see today) requires facilitation that guides and pushes the participants while playing the devil’s advocate to fill in any gaps in the deliberation.

Political infiltration and fandom have made it exceedingly difficult to separate politics from even the smallest actions and choices in our lives. In his book, Talisse recommends pursuing collective activities that are intentionally non-political to detach from this political inundation. While I believe that such activities would be beneficial, I think it is unreasonable to believe that this alone would succeed in controlling citizens’ growing political fandom. Based on deliberation’s features, it seems like the combination of this non-political activity with proper deliberation could seriously help to lessen the polarization cycle that we see creating political fandom and general antipathy in the broad political environment. While I still believe that the potentially political nature of deliberations could increase polarization in certain cases, proper deliberation with agreements, guidelines, and facilitation seems to present a viable avenue for cooling political distrust and reengaging citizens with the mutual trust in the rationality of their opponents.