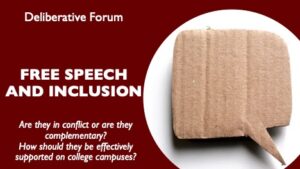 On November 4, 2021, the DCI hosted a deliberative forum entitled, “Free Speech and Inclusion: Are they in conflict or are they complementary? How should they be effectively supported on college campuses?” The forum began with three expert panelists who discussed the tensions between free speech and inclusion, followed by a panel discussion moderated by Dan Layman, associate professor of philosophy at Davidson College. Graham Bullock, associate professor of political science and DCI faculty advisor for the DCI at Davidson College introduced the panel, which included Keith Whittington of Princeton University, Pareena Lawrence of Yale University, and Susan Brison of Princeton University.

The panelists discussed topics such as speaker invitations and the importance of the intent behind them. Professor Whittington suggested that serious scholars who have views that some view as exclusionary ought to have a place to express their views on college campuses, and Professors Brison and Lawrence agreed, adding that timing and context matter. The panelists also agreed that regardless of whom extends an invitation, everyone should thoroughly consider the purpose and impact of the event. The panelists also discussed the tensions between free speech and inclusion, concurring that in at least some cases, conflicts do exist. Each of the panelists spoke about the importance of colleges and universities articulating their mission and considering potential controversies before they arise.

You may view the panel discussion here.